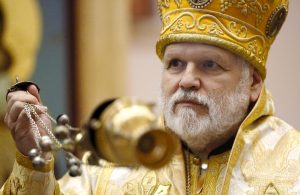 Bishop Paul of Chicago and the Diocese of the Midwest was born in 1953 to Nicholas and Georgia Gassios, natives of Castanea, Greece. As an infant, he was baptized with the name Apostolos, in honor of the holy Apostle Paul, at Saints Constantine and Helen Greek Orthodox Church in Detroit.

After ordination, he was assigned to Saint Thomas the Apostle Church in Kokomo, IN, which he served until June 2005. He briefly served as Rector of Archangel Michael Church, St. Louis, MO and the Nativity of the Holy Virgin Church, Desloge, MO before his transfer to the OCA’s Bulgarian Diocese and assignment as Dean of Saint George Cathedral, Rossford, OH in 2007.  In August 2014, he was named Administrator of the Diocese of the Midwest and relocated to Chicago.

On October 20, 2014, he was tonsured to monastic rank with the name Paul, in honor of Saint Paul the Confessor, Patriarch of Constantinople.  On October 21, 2014, the Holy Synod elected him to fill the vacant Episcopal See of Chicago and the Diocese of the Midwest. Archimandrite Paul was consecrated to the Episcopacy and enthroned as Bishop of Chicago and the Midwest at  Holy Trinity Cathedral in Chicago on Saturday, December 27, 2014. Since his enthronement, Bishop Paul’s episcopal ministry has been marked by a special focus on contemporary challenges to living the Christian life, especially for families.